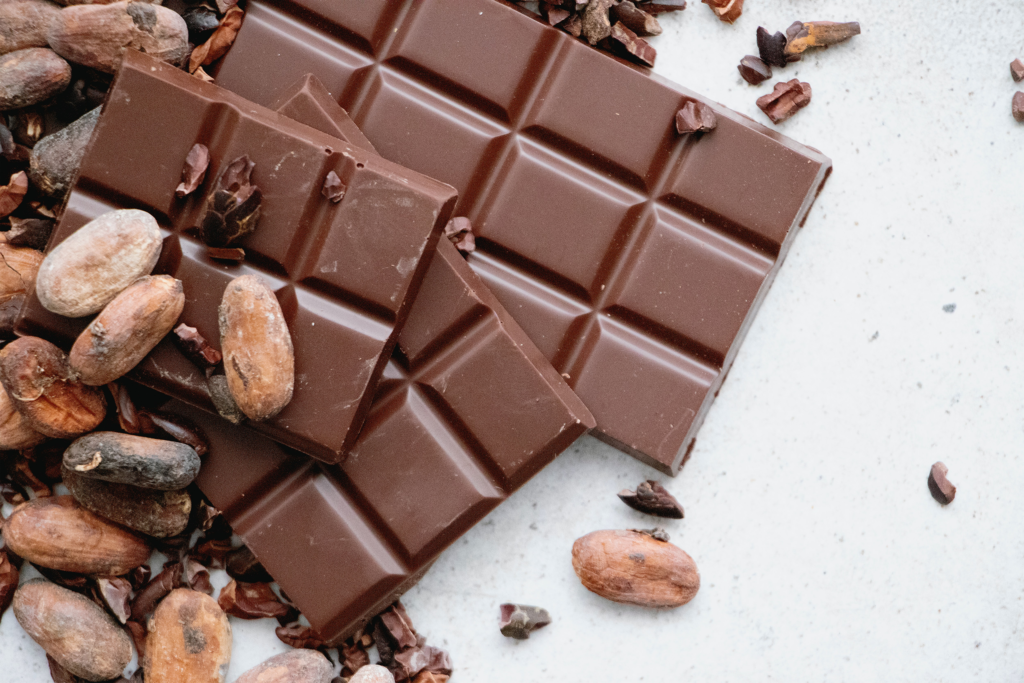 That chocolate is magic and has powers beyond our control. It elevates our mood and gets us in the mood. Historically, this isn’t something new. Scientifically known as theobroma cacao, this ancient superfood is literally translated from the Greek etymology as Food of the Gods.

Its history can be traced as far back as 1900 BC, with evidence from the Olmec Indians and Mayans of Southern Mexico and Northern Guatemala. The oldest record of it was found in residue in a ceramic pot recovered from a Mayan settlement in Guatemala and the Aztecs of Tenochititlan in what is now modern day Mexico. Their ruler, Moctezuma, kept the sacred cacao beans in the safest places and used them as a form of currency.

Throughout these ancient cultures, culinary use and consumption of cacao was reserved for the elite. The Aztecs drank it as a spicy, bitter beverage called ‘xocoatl,’ which means bitter water, and they added spices like cinnamon, chilis and vanilla bean. No sugar was added and definitely not dairy either.

From the 14th century onward, expeditions sponsored by the Spanish monarchy allowed different commodities all over the world to cross oceans. When Hernan Cortez succeeded in conquering the Aztec empire, it was the stores of cacao he sought and happily consumed. He was even quoted to have said, “One beaker keeps a soldier fresh for the whole day.”

Cortez brought cacao to Spain and eventually it spread throughout Europe. The spicy bitter beverage was an instant hit with European nobility and chefs began to experiment with the magical bean. As the cacao bean became refined and diluted with dairy, sugars and other fillers, its cost was reduced and made available to the masses. It eventually spread to the United States and now is a $60 billion industry.

While commercial chocolate tastes wonderful, it is highly processed and many of its health benefits are lost through high heat roasting. Not only that, but many questionable ingredients are added to an already perfect food. Dairy, in particular, blocks absorption of natural antioxidants in every raw cacao bean and it is highly acidic as well as mucus forming.

Refined, bleached sugars and even high fructose corn syrup is added, causing all sorts of problems in the body. We now have staggering scientific evidence that proves sugar does not benefit our health. Now we’ve turned one of nature’s most amazing foods into nothing more than a candy bar. One of the most revered qualities of cacao in its
unprocessed, unroasted state is its amazing antioxidant content – it has 119 times more than bananas, 20 times more than blueberries and four times more than its processed counterpart, dark chocolate. These antioxidants, which combat the proliferation of free radicals in the body, are responsible for many of the positive health effects of raw cacao.

For starters, these antioxidants, including flavonols and polyohenols, protect us from heart disease, stroke and the accumulation of LDL cholesterol with their anti-inflammatory properties. Flavonols likewise improve skin texture and hydration.

Studies show that raw cacao can protect us from the sun’s UV rays, alleviating sunburn. The polyphenols repair and protect our cells from deteriorating and aging prematurely; keeping us looking younger and, more importantly, feeling younger. Shown to be an awesome source of iron, raw cacao is good for the circulatory system as it prevents blood clots, improves circulation and lowers blood pressure. With one of the highest magnesium contents in a natural food source, raw cacao provides energy, boosts immunity and prevents fatigue. Given that about eight in 10 North Americans are magnesiumdeficient, raw cacao is always a welcome addition to our diet.

A significant amount of fibre in every serving of raw cacao helps with digestion and weight management, while its monoamine oxidase (MAO) inhibitors curb appetite. Other nutrients and components that contribute to the well-being found in raw cacao include copper, manganese, vitamin C, omega 6 fatty acids, alkaloids, protein, beta carotene and theobromine. It also contains natural mood enhancing compounds. PEA, also known as the bliss chemical or the love molecule, is a compound that triggers the release of endorphins, the same as are present when falling in love. Not only that, but more cacao in our diet can enhance our productivity of dopamine and serotonin, two mood altering neurotransmitters, responsible for feelings of euphoria. It’s no small wonder chocolate and love are always associated with one another.

Now comes the moment you’ve all been waiting for … you’re probably wondering how often you can indulge in this delicious treat. Well, you can eat it every day. Actually, the truth is we should strive for variety in our diet… (so every other day). Adding cacao to one’s diet is easy and fun. Raw cacao powder can be blended into smoothies and other beverages – it’s the quickest thing to make your own hot chocolate with a quick wiz in the blender – with any nut butter, cacao and coconut nectar.

Imagine chocolate raspberry cardamom cake, wild orange goji berry chocolate fudge and after dinner mint chocolates. It’s even delicious savoury dishes like herbes de Provence cashew cream truffle tartlets and mole sauce for walnut tacos with pico de gallo in romaine boats. Or you can eat cacao straight up by adding the unroasted broken beans, also known as cacao nibs, to trail mixes or as toppings on dishes and desserts. If you want to make your own chocolate at home, here’s a recipe you can do in four easy steps.